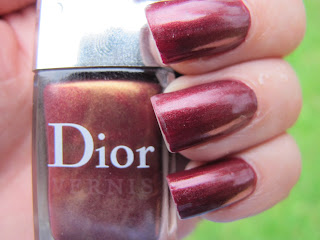 Well I was at the Dior counter in one of my local department stores and was talked into having a make over! At the end of the session the question was asked what would you like to purchase? I have used such and such etc. etc. I decided to ignore all that and get this nail polish instead which is one of their limited editions for autumn/winter just gone, it is a lovely russet red and it reminds me of the coat of an Irish Setter named Kelly (from, I hate to say it, when I was a school girl). The gold shimmer that you can see clearly in the bottle is dispersed throughout the nail polish colour when on the nail. 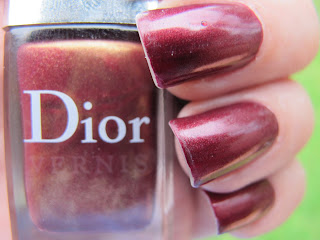 This was opaque in one coat, but I put on two just to be on the safe side, followed by Seche Vite topcoat which it didn't really need as it was very glossy just by itself. (I always use a top coat, as I feel it helps the polish last that little bit longer) That is a raindrop on the middle nail rather than an imperfect mani, which meant that my photography session was cut short, and these two photos were the best of a bad bunch. Oh and in case you were wondering the slight blue shimmer at the base of the bottle is my uniform being reflected!
Posted by Unknown at 18:41