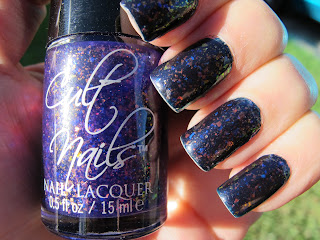 I've seen a lot about Cult Nails on Facebook, so I bought the Diva's and Drama collection, which is a pale pink Enticing, a pale orange Scandalous and pale blue teal Manipulative along with a flakie Seduction. Of the four colours I adore Seduction the most. 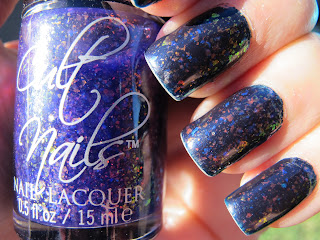 Seduction is a blue suspension with royal blue flakies along with red flakies that turn gold to green, which you can just make out on the middle finger near the cuticle. This was two coats Ultra3 Midnight Fever, with one coat Seduction and one coat Seche Vite. I haven't used or done anything different than I usually do BUT my mani chipped on three fingers within two days! I can usually get away with at least four days before I change because I'm bored with the colour. 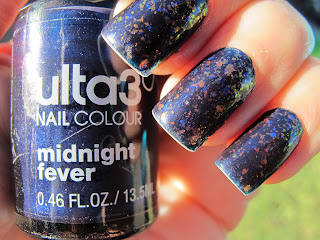 And this is Ultra3 Midnight fever, a very dark blue just before black colour, a new favourite to try some of my other glitters on.
Posted by Unknown at 20:08