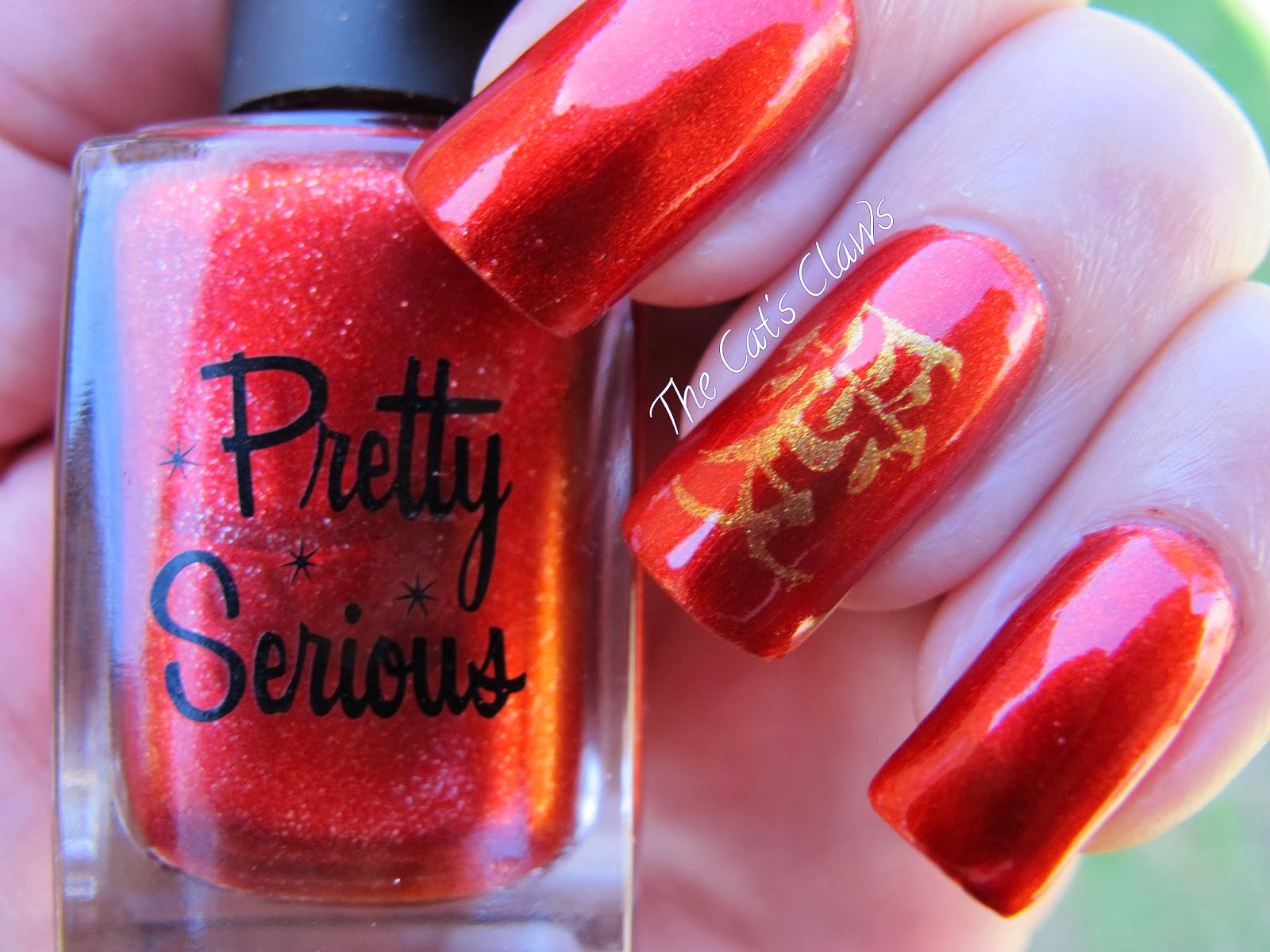 Or in other words Happy New Year, for today is the start of the Chinese New Year. And at this time of year Chinese people wear red clothes, decorate their homes with poems on red paper, and give children "lucky money" in red envelopes. Red symbolizes fire, which according to legend can drive away bad luck. The fireworks that shower the festivities are rooted in a similar ancient custom. 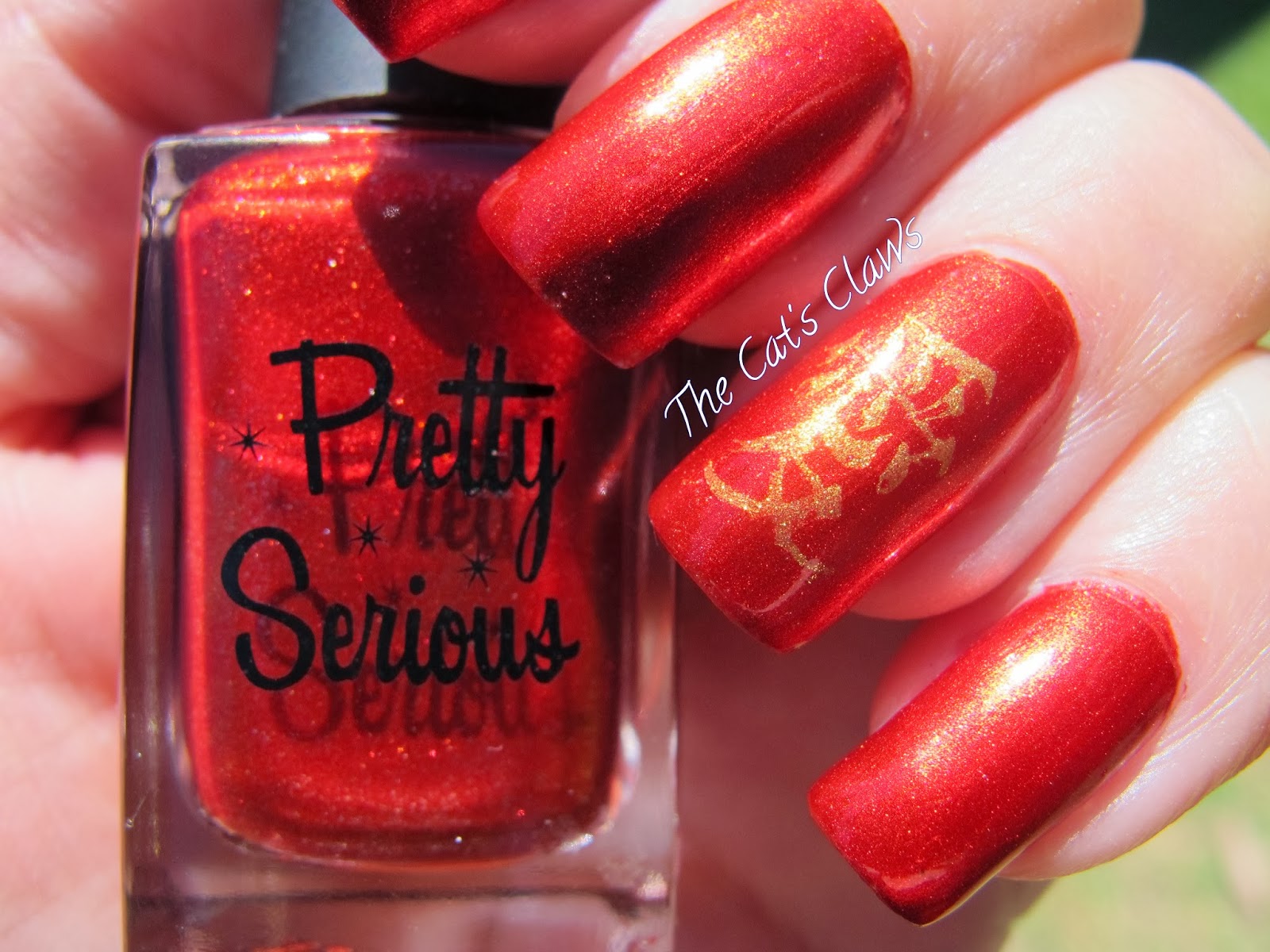 When I first wore Pretty Serious Santa's Sunburn (you can read my review here), several of my Chinese customers admired it greatly declaring it Chinese Red and very auspicious, I knew that I was going to use it to do a Chinese New Year themed mani. 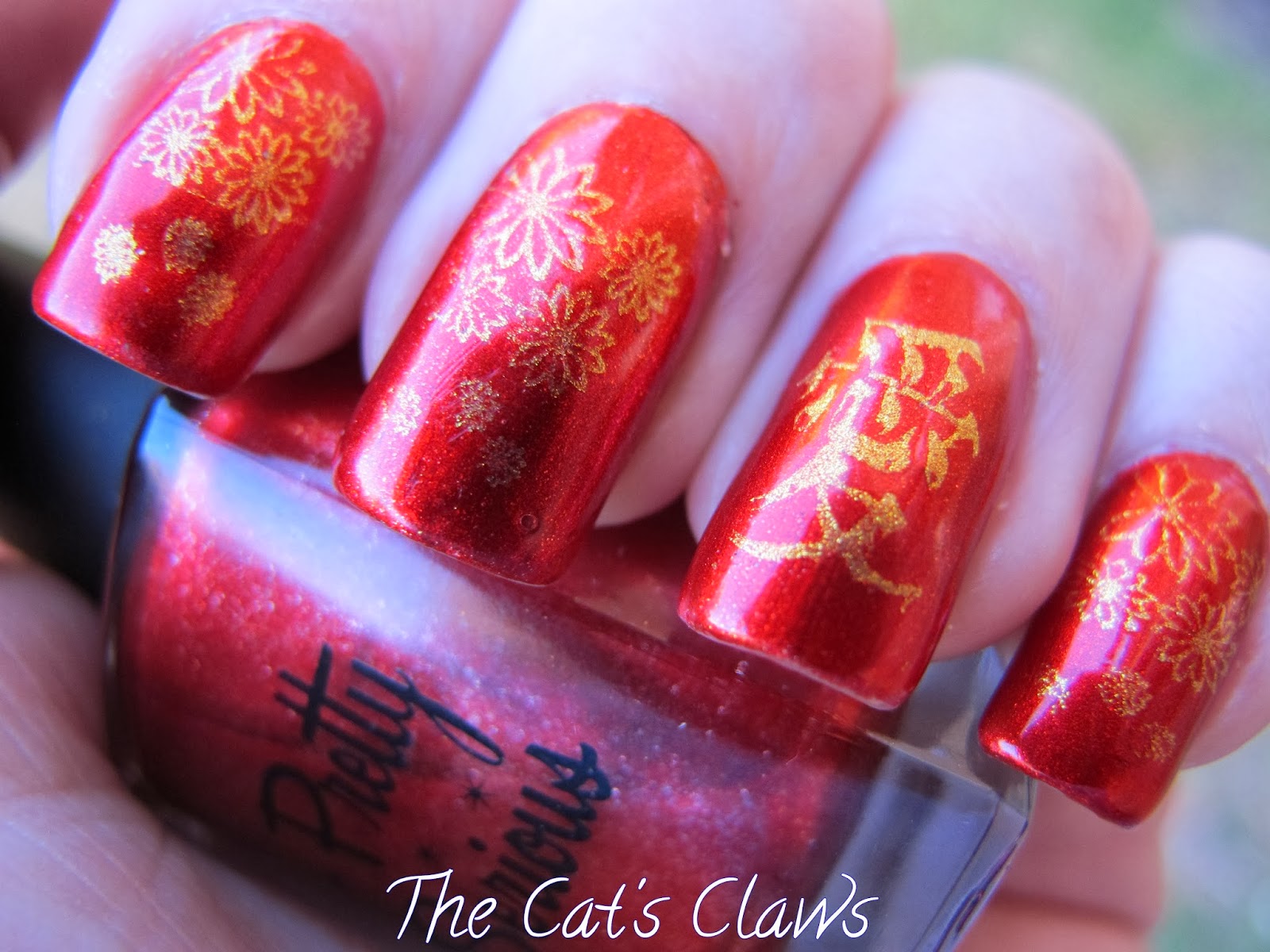 One stamped Chinese symbol looked quite lonely by itself it means love in case you are wondering, so I cast around for some other Chinese looking stamps and finally decided on these chrysanthemum looking flowers and in Chinese mythology chrysanthemum's Chinese name sounds very similar to long life plus its the flower for the 9th month which just so happens to be my birth month! 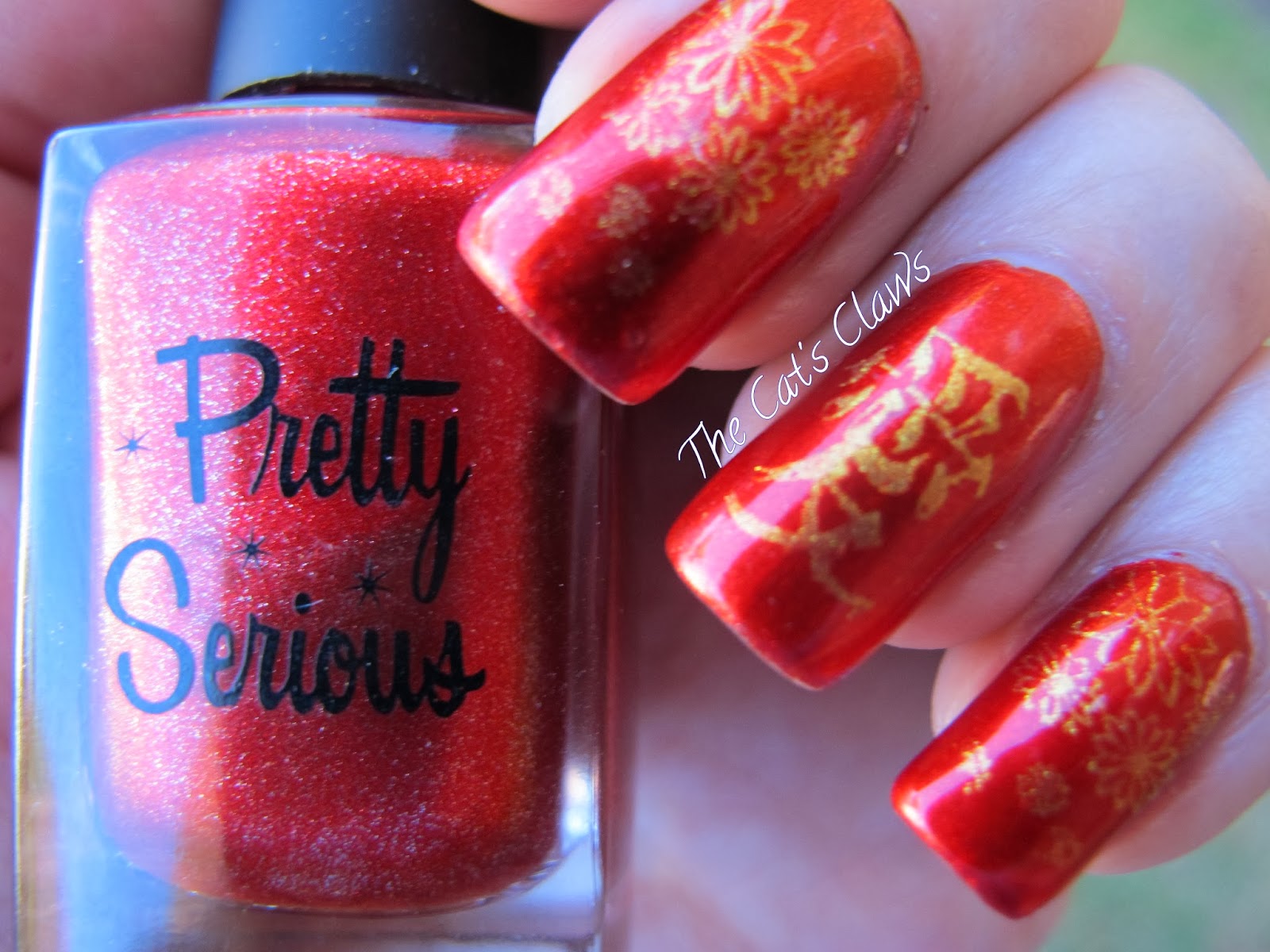 On to my mani then two coats of Pretty Serious Santa's Sunburn then one coat of Seche Vite. Then stamped using Kleancolor Metallic Yellow on plates BM12 for the flowers and M8 for the symbol. I'm afraid I don't know to much about the plates as I just bought them from a third party. Topped of with another coat of Seche Vite.

Happy Australia Day Every One 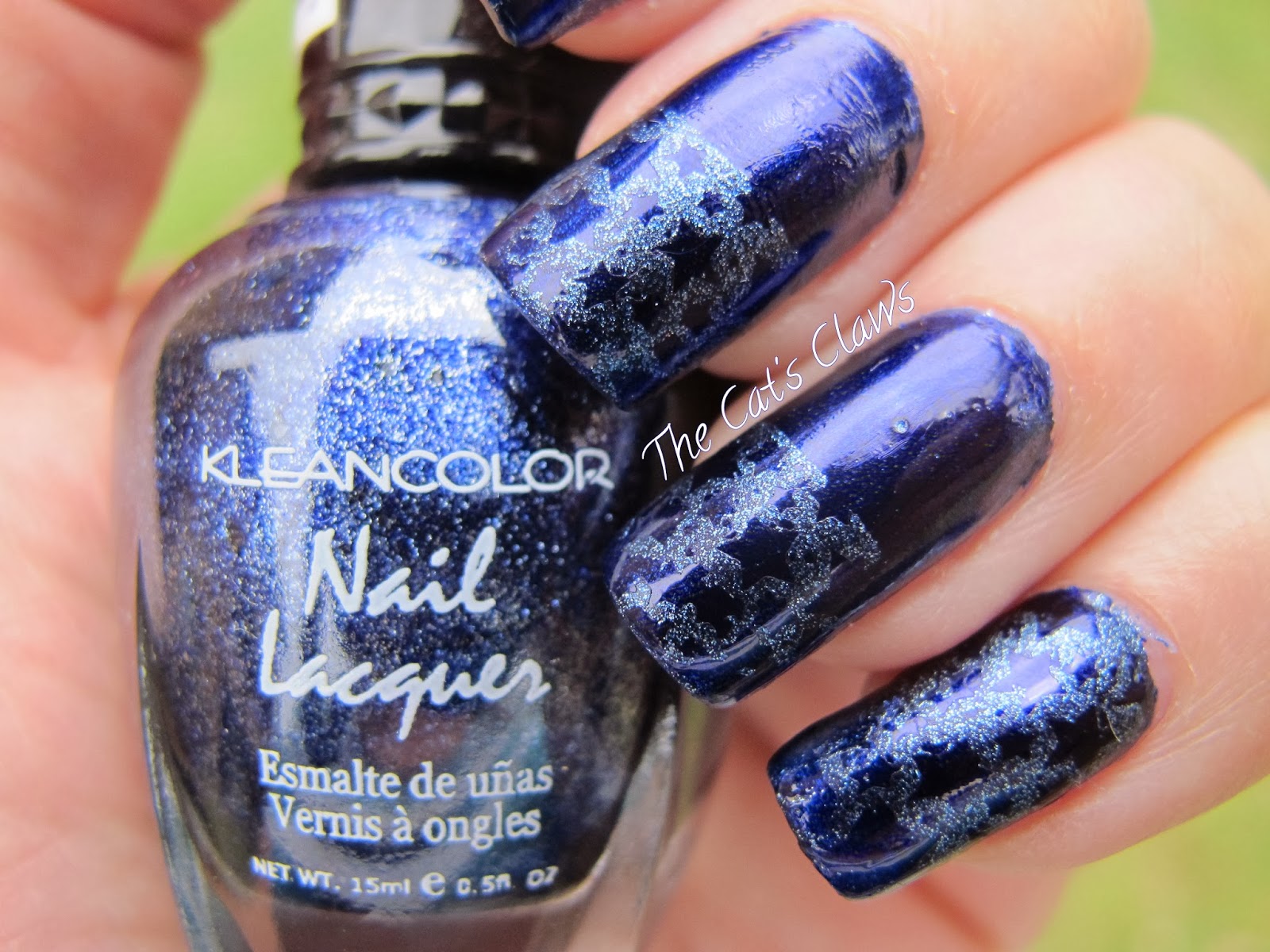 Instead of doing a green and gold mani like I did last year, I thought I would do something based on the Australian Flag. I chose Kleancolor Metallic Sapphire a rich beautiful jewel toned blue with Seche Vite top coat which completely transforms the polish as you can see when I stamped over the top with the exact same polish! 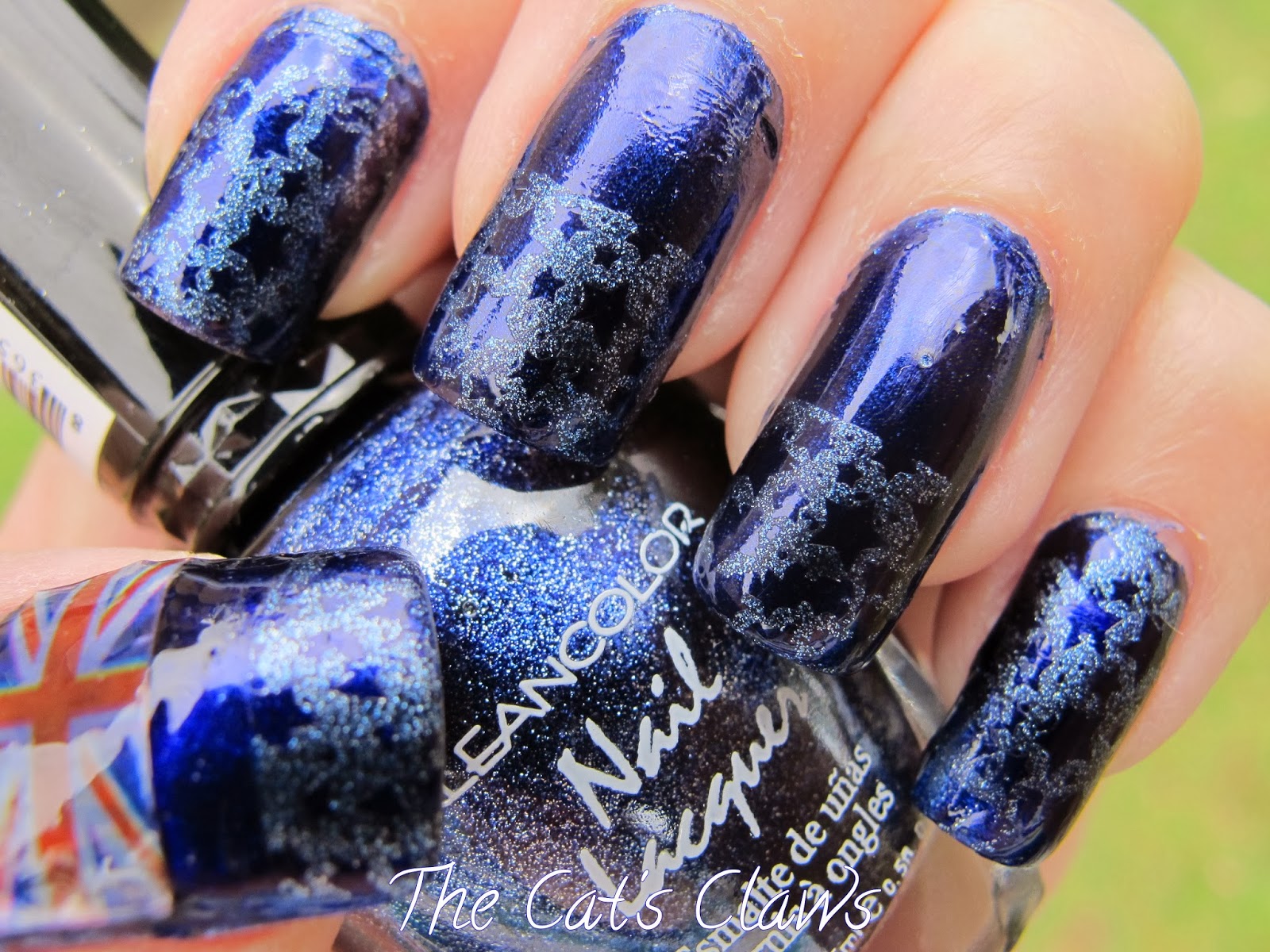 I then cut up an Australian Flag sticker to get the Union Jack part of the flag to stick on my thumb nail followed by a top coat of Seche Vite and then stamped too. This is really my first attempt at stamping that has not been me just messing about at home so please be kind.
Posted by Unknown at 12:34 No comments: 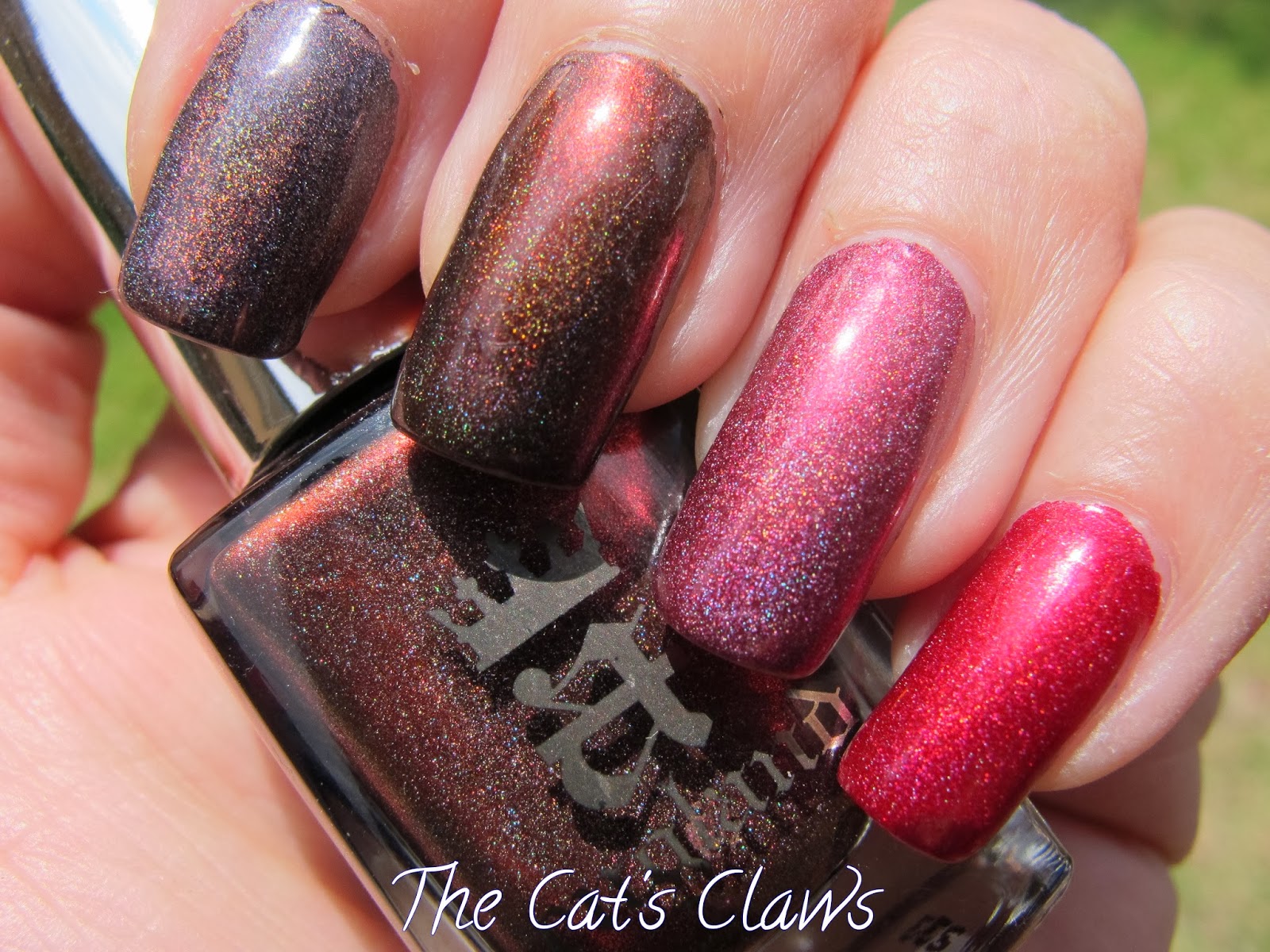 Some time ago I purchased the A England Burne-Jones Collection of five polishes all holographics and today I'm going to show you my favourites in no particular order! 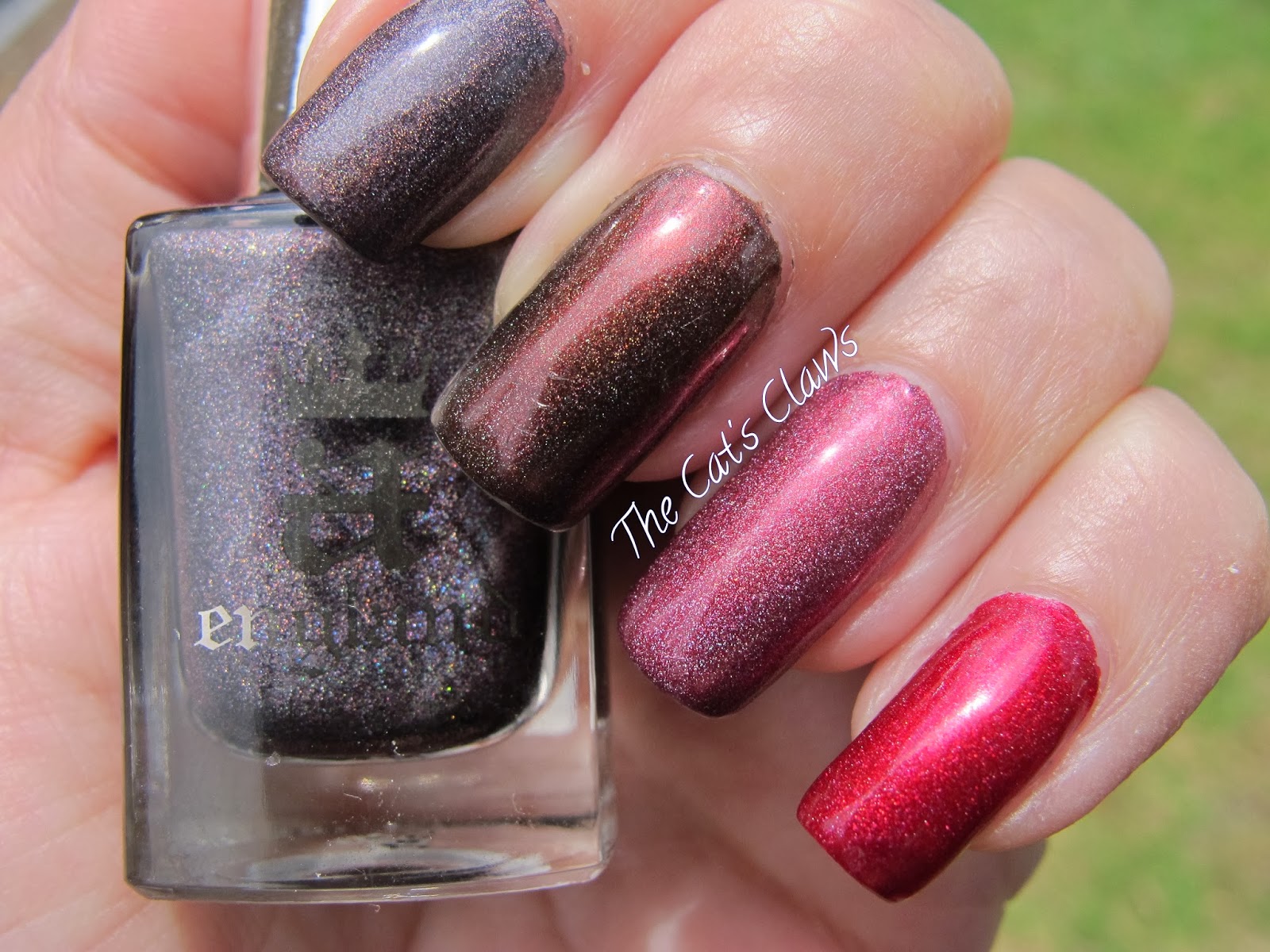 Well I'm afraid it is far too difficult for me to choose a favourite, I love them all! So instead I'll start with Sleeping Palace a dusty mauve which has a strong scattered hologrpaphic effect which also produces that lit within look in low light. 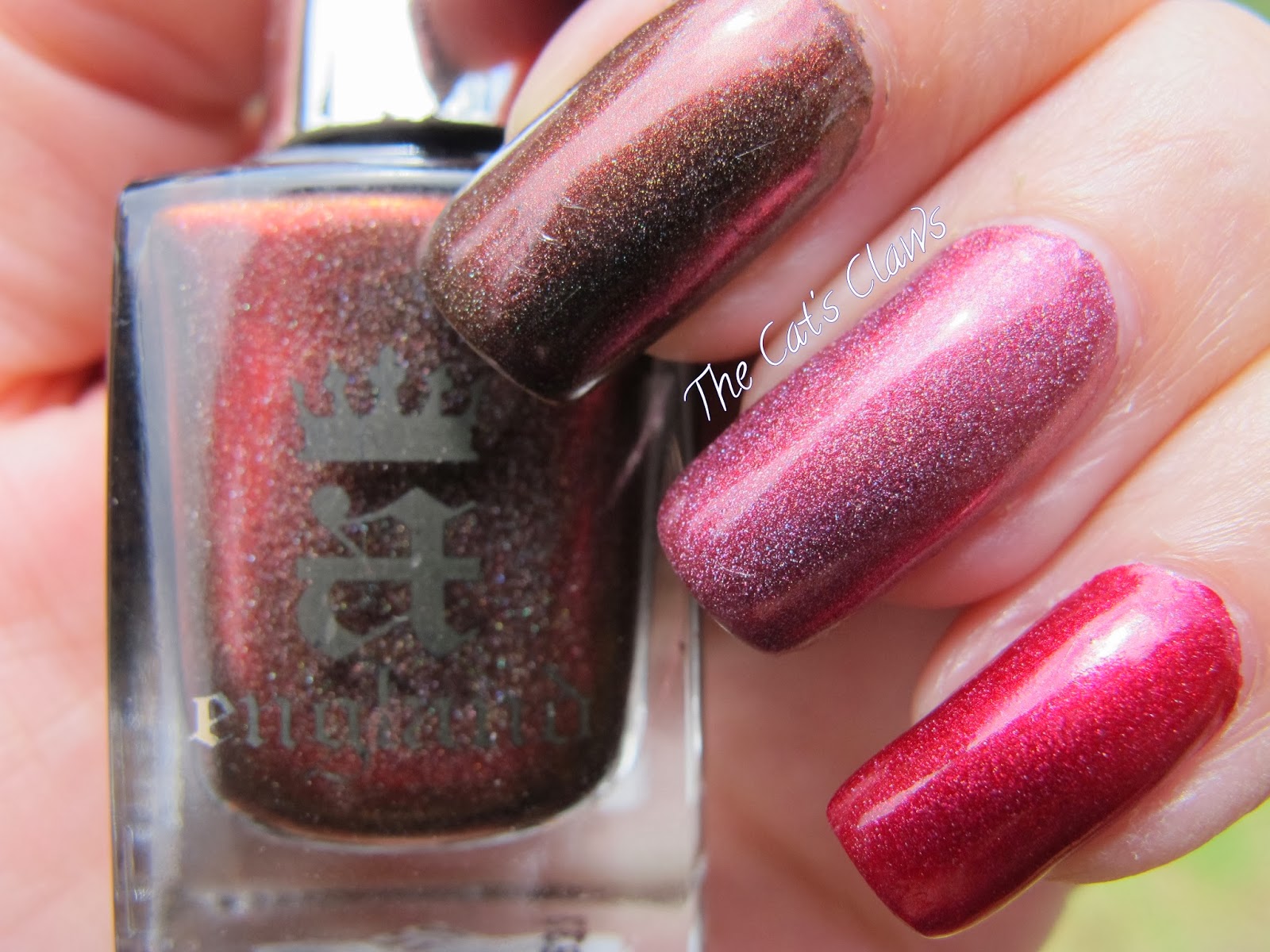 A England Briarwood, I wasn't really expecting to like this one when I first received it, but it is drop dead gorgeous and very unique being a burnt brownish red. 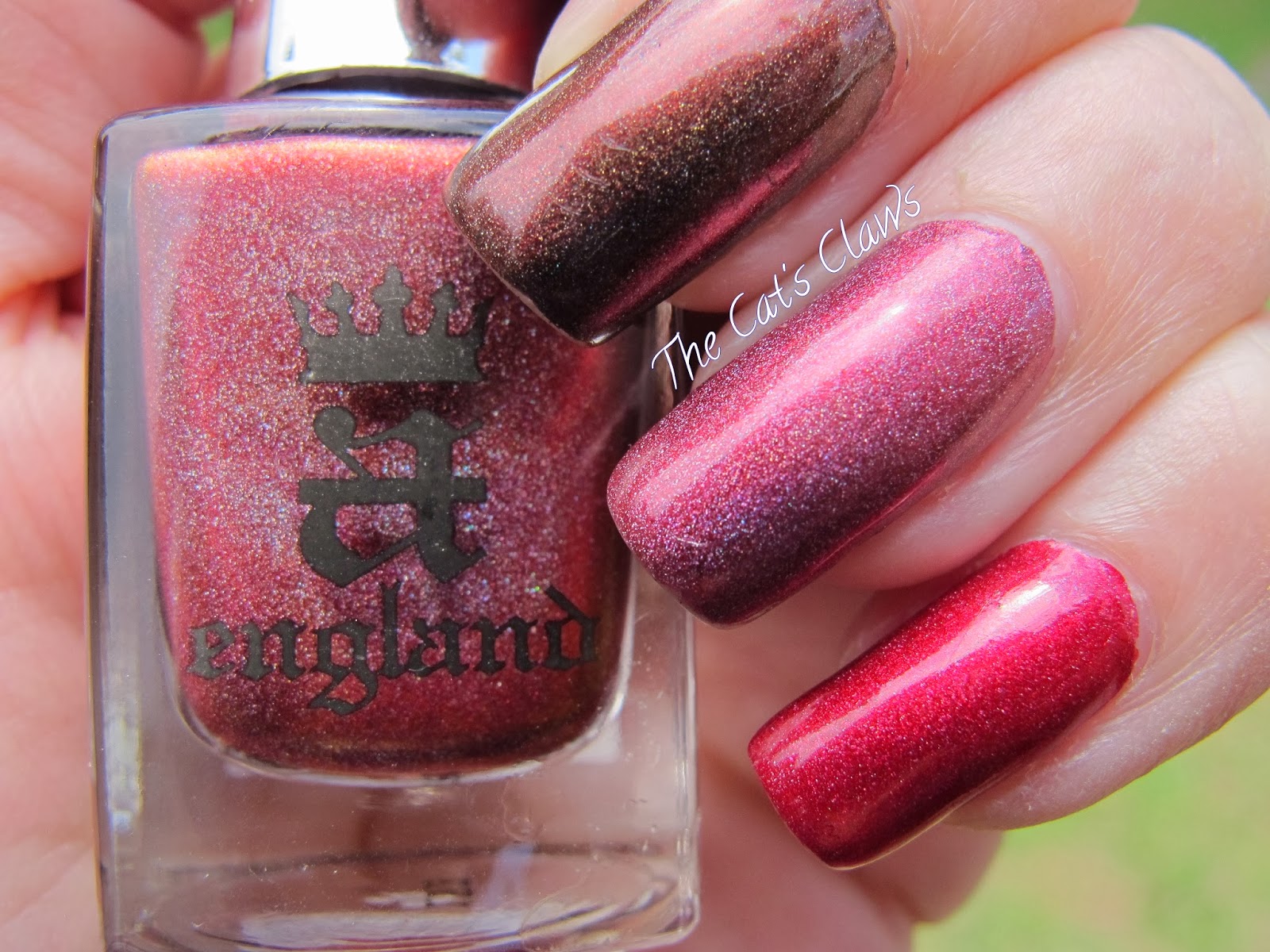 A England Briar Rose is divine, being a beautiful dusty red based purple. 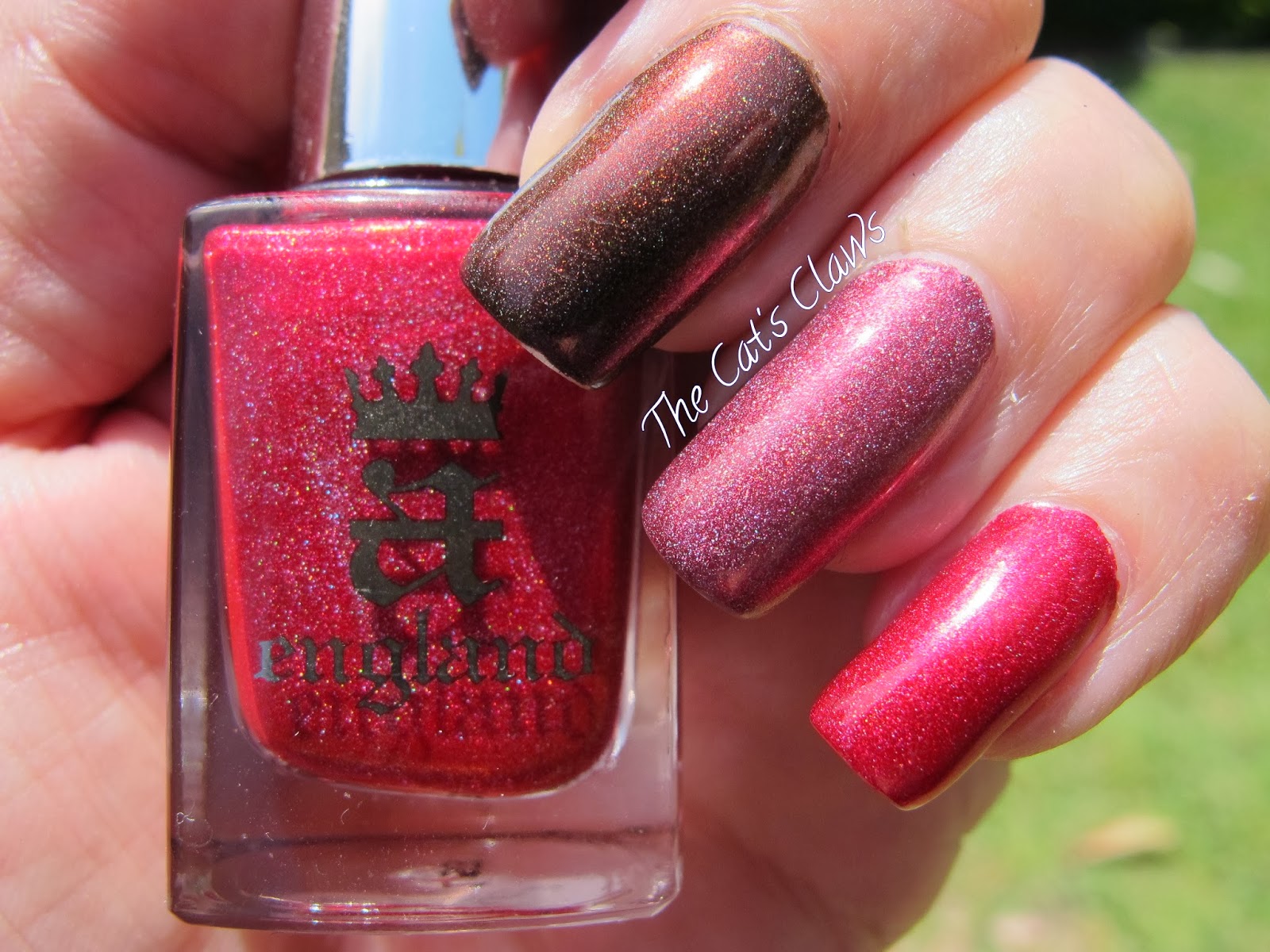 A England Rose Bower nothing more to be said really since my review here. Rose Bower is absolutely gorgeous. 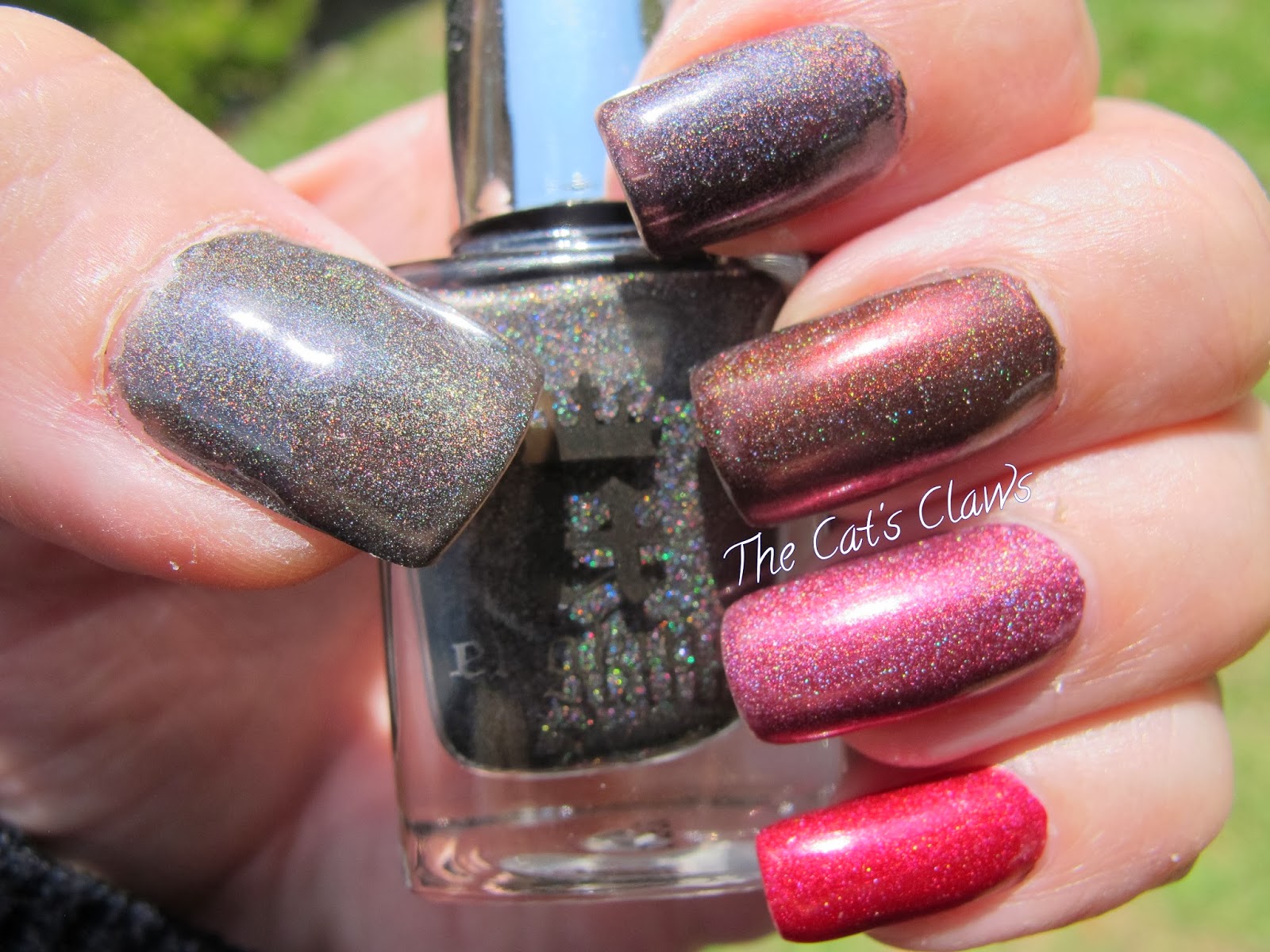 And lastly A England Fated Prince which is charcoal grey holographic with green undertones and has a strong scattered holographic effect.
All of these were two coats with a top coat of Seche Vite, they have lasted all week at work plus todays housework! As my mani is still looking perfect I'm loathe to take it all off, but needs must for Australia Day tomorrow!

Can you choose a favourite?
Posted by Unknown at 15:17 No comments:

Pink- ing Of You! 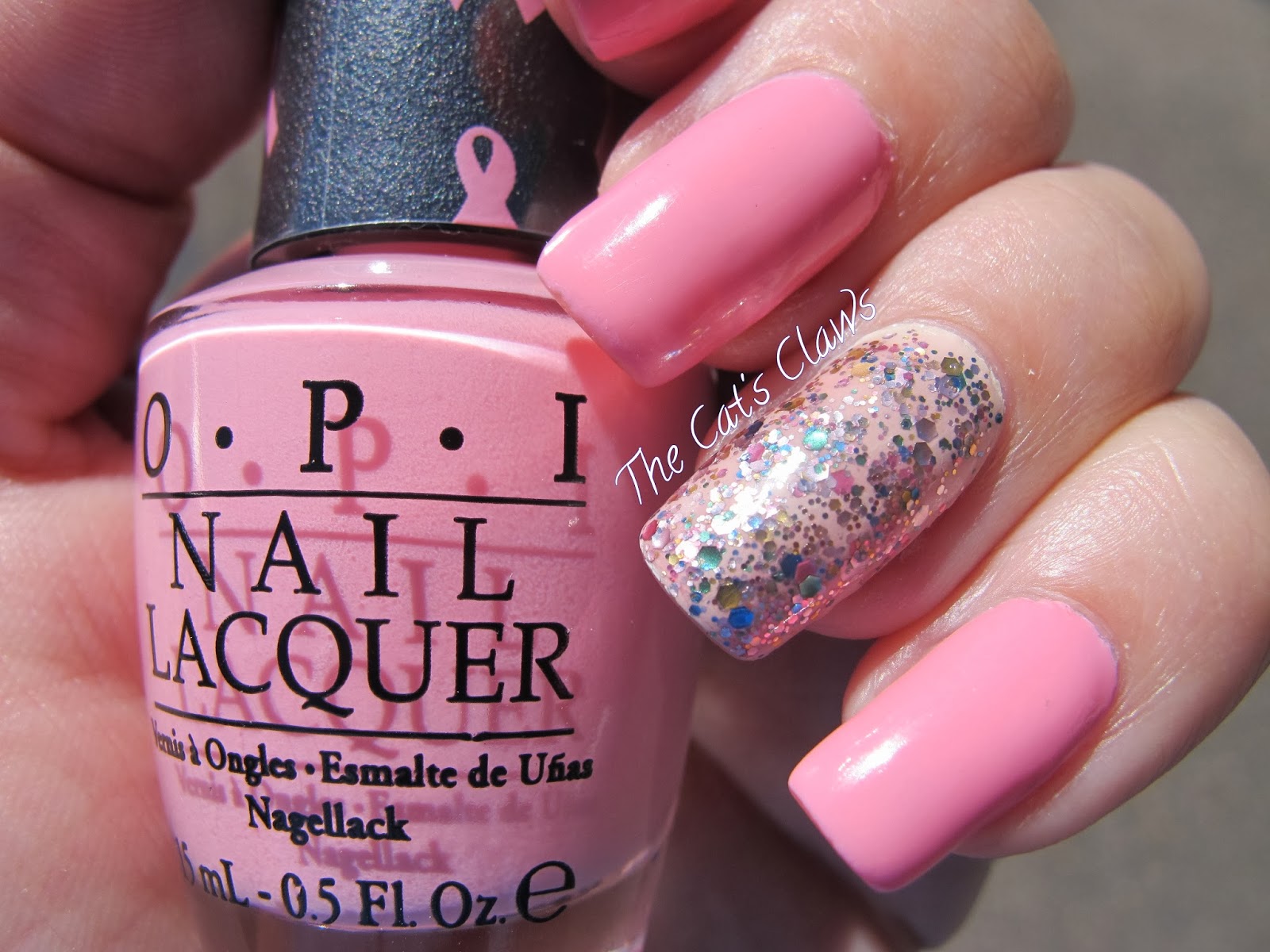 Casting about the other day for something nice and clean to wear after the dark polishes I've been wearing just lately I came across OPI's Pink of Hearts 2013 duo still stuffed in the bag and not having seen the light of day since I bought it! It missed Breast Cancer Awareness week which is was released for and the pink day at the SCG (cricket for those not in the know). Still better late than never is my motto! 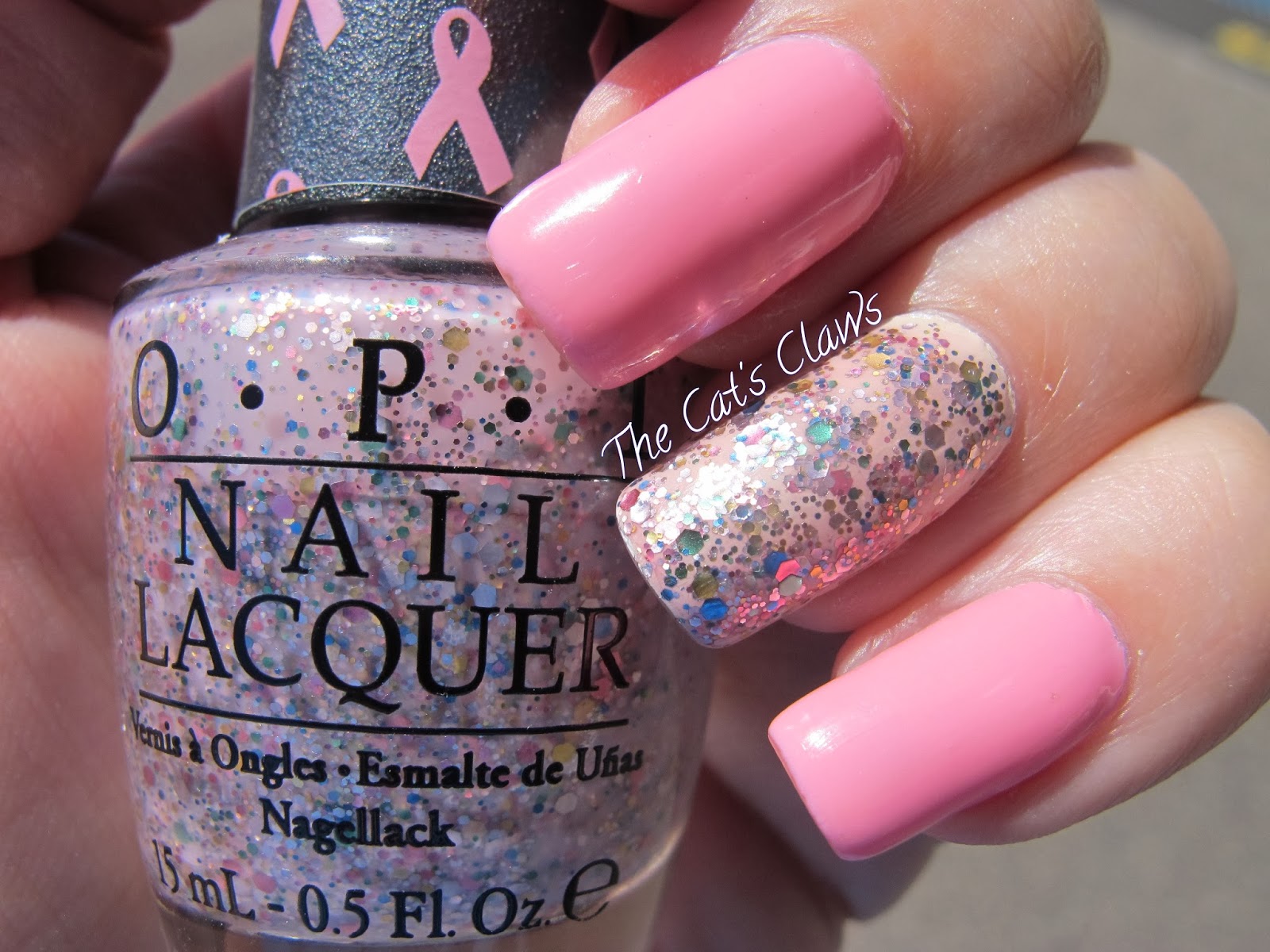 On to my mani then three coats of OPI Pink-ing Of You which is a beautiful cool toned pink creme and didn't need any embellishment at all on every finger except my ring finger. I used three coats of OPI My Vampire Is Buff on my ring finger and then just one coat of OPI More Than A Glimmer which is a limited edition pastel coloured glitter in a matte pink base. For those that know me I don't like matte at all so did a top coat of Seche Vite just so that is sparkles!
Posted by Unknown at 21:16 No comments:

Email ThisBlogThis!Share to TwitterShare to FacebookShare to Pinterest
Labels: More Than A Glimmer, OPI, Pink-ing of You 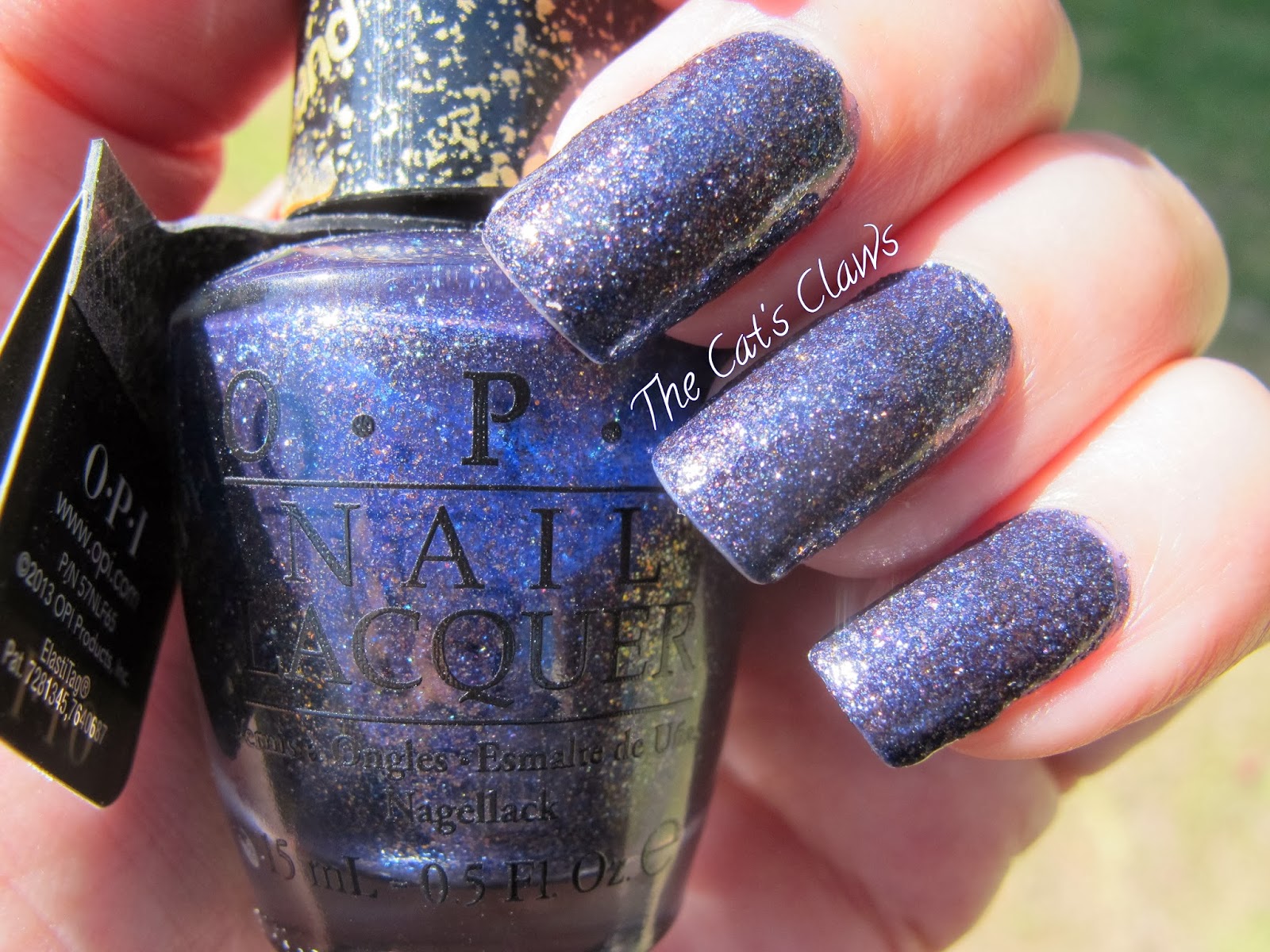 Alcatraz Rocks was bought out by OPI as part of their San Francisco collection last year. It is a wonderful sand textured polish leaning more purple than my photos actually show. I have worn this quite a lot on my tootsies but have not taken any photos when it has actually graced my mitts (my bad) until yesterday. 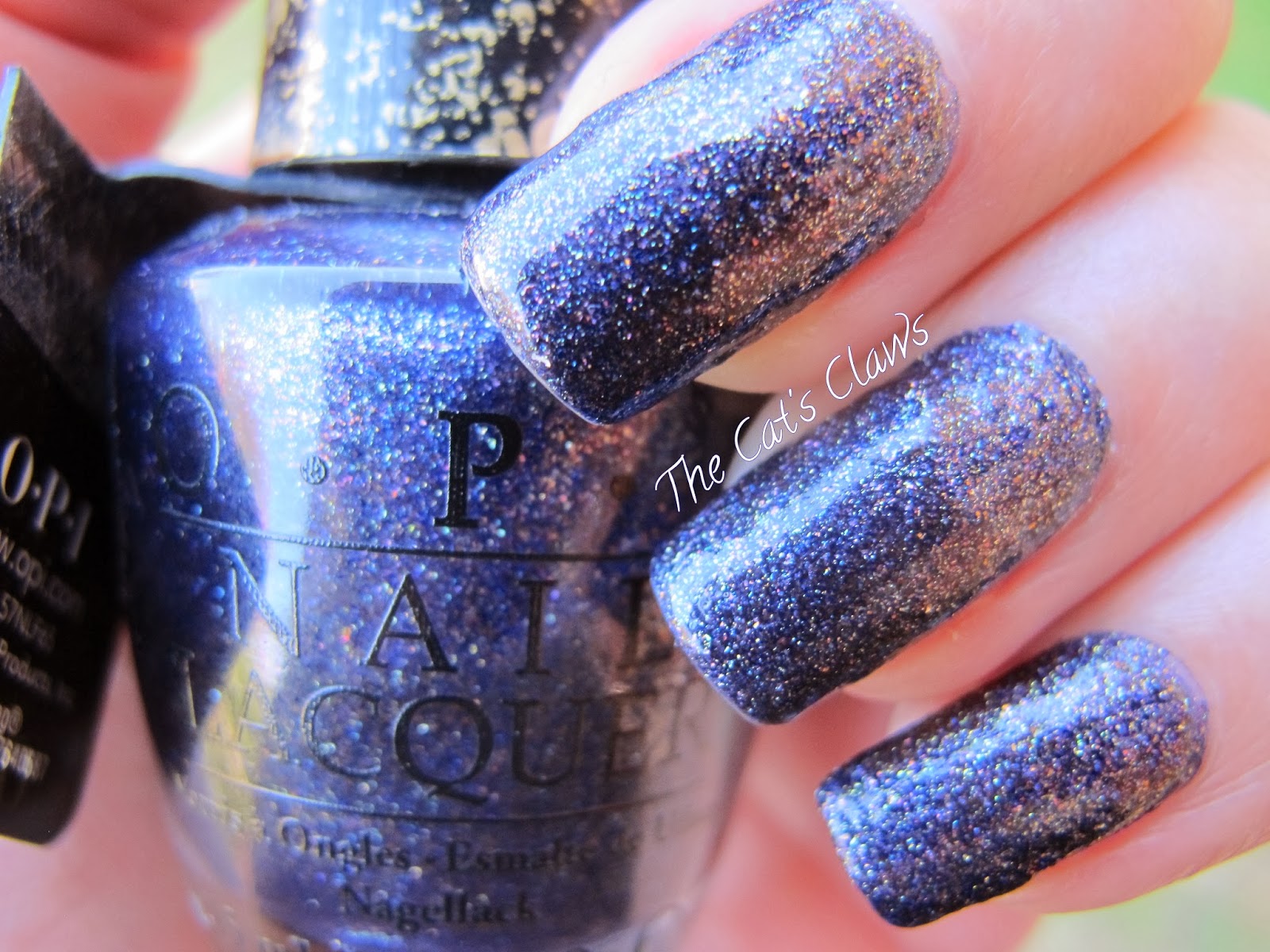 Alcatraz Rocks is like all the sand collection in that it dries matte with a teeny bit of glitter. I however love it glossy, it just sparkles so much more. On to my mani then two coats of Alcatraz Rocks with one thin coat of Seche Vite that still left a bit of texture to my nails but gave Alcatraz Rocks a wet look shine.
Posted by Unknown at 15:40 2 comments:

Happy New Year Every One

I know its a couple of days late but I wish you all a Happy and Prosperous New Year. My New Year's Eve was very good, we spent it eating yummy food and drinking far too much before ringing the UK. 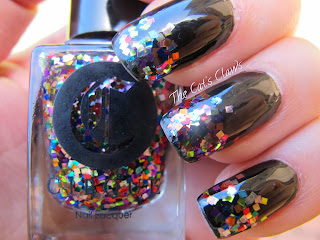 I have seen so many amazing stamped nails showing the wonderful celebration that is New Year that I really wish my stamping skills were good enough for even the most basic of designs. Oh well c'est la vie as the French would say, instead I'm afraid you'll just have to gaze upon glitter! And not just any old glitter but SQUARE GLITTER, my favourite kind. 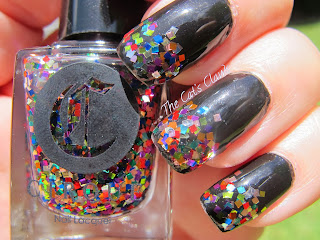 On to my mani then two coats of Covergirl Black Diamond a very glossy perfect black. Then Cirque Le Invader the most beautiful mix of practically every colour very glittery square glitter just brushed on to my tips as a glitter french. Followed by two coats of Seche Vite which did shrink the polish a tiny bit.
Posted by Unknown at 22:39 No comments: