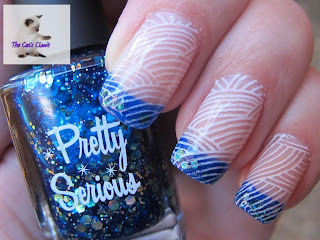 So for my mani this week I was pondering on what to do, as you do when you can't think of a single thing. When I thought glitter tips! And then I remembered there was a bit of fuss about the following picture. It wasn't exactly about the mani but about old hands! I for one  would love to know the age we have to be before we are to stop taking care of ourselves or wanting pretty things! 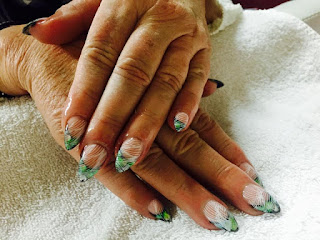 The lovely Jess in a group I follow on facebook posted up a picture of the mani she had created for her mother-in-law. The mani itself took a fair amount of time to create being quite complex and highlights Jess's creative flair. (I've just used polish to recreate something similar) Wherein certain people suggested she should have used a better model, with nicer hands etc. All I could see was a perfect mani that was really pretty and one that I would like to recreate for myself. 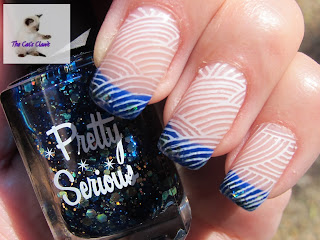 On to my mani then, a clear base of Qutique Gel then a french tip using Barry M Gelly Blue Grape with Pretty Serious Moments Til Midnight dabbed on top. And then stamped with hehe 028 using Mundo De Unas White. Followed by Glisten n Glow HK Girl topcoat to protect the stamping. 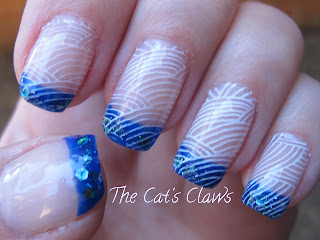 I was unsure if the flowing white lines would detract from the mani, but in actual fact they enhance it and I have already had many compliments for this mani its just so striking in real life!
Posted by Unknown at 14:40